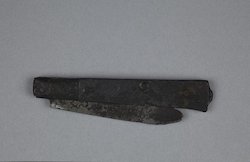 The world’s mine oyster, which I with sword will open — William Shakespeare

When in The Merry Wives of Windsor, Shakespeare's scalawag Falstaff refuses to lend money to his trash-talking henchman Pistol, Pistol replies, "Why then, the world’s mine oyster, which I with sword will open."

But the English-speaking world has.

"The world's your oyster" we are prompt to say to anyone who's unsure about her next avenue.

It is advice I'd freely offer kids, teens, and twenty-somethings fresh out of college.

It's also advice I'd offer retirees.

So often I hear retirees say that they can't decide how to spend their time productively—that the opportunities to accomplish good things are few and that they lack the know-how needed.

It's a shame our language has forgotten the second half of Pistol's threat, or else we'd say: The world's your oyster if you carry a sharp blade.

In other words, countless pearls are within your grasp provided you can pry them out; so carry a decent knife.

You should realize that Shakespeare's audience would not have found it so.

Being voracious consumers of oysters, they would have grasped it—as they did Pistol's words—instantly.

That's because large rivers like the Thames teemed with oysters in their day, supplying London with cartloads of the cheap and savory snack.

Playgoers in particular liked to chomp on oysters during performances at the Globe, as archeological evidence shows.

So when Pistol called the world his oyster "which I with sword will open," they caught his drift immediately: Oysters are everywhere; they're tasty—and some even have pearls; all you need do is open them.

What a crime it would be to waste them for lack of a sharp instrument.

Call it what you will—retraining, reskilling, upskilling, or lifetime learning—keeping your blade sharp is a prerequisite to fulfillment in your final years on Earth.

So get off your ass and get busy acquiring a few new skills.

The world's your oyster.